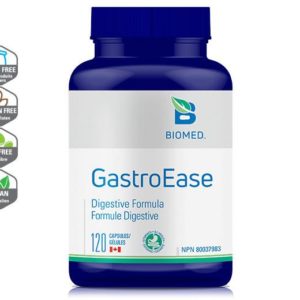 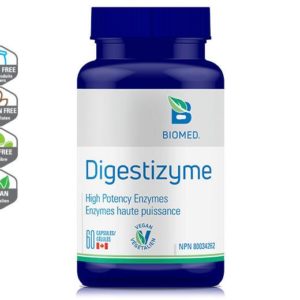 GastroEase is a synergistic combination of whole plant extracts (including Mastic gum) well known for anti-ulcer and anti-inflammatory properties. It is designed to aid in cases of H. pylori induced peptic ulcer disease, gastritis and GERD.

Blending the wisdom of traditional herbal medicines together with the knowledge of modern science resulted in the creation of Biomed GastroEase+TM. This synergistic combination of whole plant extracts (mastic gum, DGL, marshmallow root, chamomile, fennel) has been designed to provide the integrated practitioner with the natural tools to help those patients with H pylori induced peptic ulcer disease, gastritis, and GERD.
It is estimated that every year approximately half a million individuals in the United States develop peptic ulcer disease.
It is assumed that proportionally the same number of Canadians develop this condition. The two most common precipitating factors are excess NSAID use and/or infection with theHelicobacter pylori bacteria. It is estimated that 70% of all gastric and 90% of all duodenal ulcers are a result of H. pylori infection.
While several clinical studies have shown that triple therapy (e.g. Ranitidine bismuth citrate, amoxicillin and clarithromycin) can be highly effective in eliminating the primary infection
(90–99%),3 increasing clinicians (and patients) are seeking natural alternatives which do not have the side effects associated with these medications.
Mastic gum
Mastic gum, a resin derived from the tree Pistacia lentiscus, is the key ingredient in GastroEase+. An in vitro study has shown that mastic gum killed 50% and 90% of the H. pylori strains tested at concentrations of 125 microg/ml and 500 microg/ml respectively.  Mastic gum’s anti-ulcer activity has also been confirmed in a double-blind controlled trial, where results showed that 1,000 mg of mastic gum daily provided 80% symptomatic relief and healed duodenal ulcer in 70% of the cases compared to placebo (p < 0.01).
Marshmallow and DGL (Deglycyrrhizinated licorice)
The anti-ulcer actions of mastic gum are enhanced by the antiinflammatory actions of DGL (deglycyrrhizinated licorice). Several studies have demonstrated that DGL assists in the healing of both gastric and duodenal ulcers. Marshmallow (Althea officinalis) root has been added to the formula as it contains 5 to 10% mucilage polysaccharides. The demulcent, emollient, and vulnerary properties of DGL and Marshmallow root account
for their traditional uses in treating inflammation of the gastric mucosa.
Chamomille
Chamomille (Matricaria chamomilla), like marshmallow, has known anti-inflammatory, anti-spasmodic, and anti-peptic actions. These actions are likely as result of chamomile’s key flavonoid constituents, apigenin. Apigenin has known anti-spasmodic actions that has proven to be three times more potent than the drug papaverine when tested in in vitro models.  In addition to apigenin, the volatile oils alpha bisabolol and chamazulene are responsible for chamomile’s anti-inflammatory actions. In another in vitro study bisabolol was shown to reduce the
proteolytic activity of pepsin by approximately 50 percent.
Chamazulene, the agent that gives chamomile tea its bluish tinge, has in experimental in vitro evidence shown to inhibit the production of pro-inflammatory leukotriene.
Fennel
Fennel (Foeniculum vulgare) has been included in this formula for its carminative and anti-spasmodic actions. A recent controlled human study has confirmed that the administration of fennel seed emulsion is superior to placebo in the treatment of infantile colic.
This information is for professional use only. This product is not intended to diagnose, treat, or prevent any disease.
Medicinal Ingredients:
Each vegetarian capsule contains:
• Mastic gum (Pistacia lentiscus) 175 mg
• Deglycyrrhizinated licorice (Glycyrrhiza glabra) 150 mg
• Marshmallow root (Althaeca officialis) 100 mg
• German chamomille (Matricaria chamomilla) 100 mg
• Fennel seed (Foeniculum vulgare) 50 mg
Suitable for vegetarians.
Recommended Dosage: Take two capsules three times a day with food or as directed by a health care practitioner.